I am working on quite a hairy non-linear regression problem where I would like to sample posterior predictive distributions. I know from MLE studies that the likelihood landscape is multimodal and heteroskedastic. MLE in my problem is computationally expensive and I aim to analyze many samples, so I opted to turn my problem into a regression where I simulate a lot of data and train a non-linear probabilistic regression model.

As a low-dimensional example, I have created some data below where the top plot is the dependent variable (called ratio) and the bottom plot shows data for three independent variables (fraction: X+0, X+1, X+2). I drew the posterior predictive distribution I expect in the top plot in red given the yellow points in the bottom plot as test data. The x-axis is just an indexing function that makes the plots look nice. 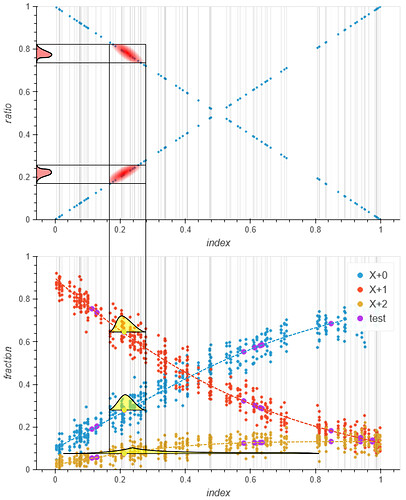 However, despite reading the tutorials on Bayesian linear regression, I struggle to construct a BNN in pyro. I found this blog post: Experimenting with Pyro's hidden native support for Bayesian Neural Networks but that does not work anymore due to an issue with AttributeError: 'HiddenLayer' object has no attribute '_batch_shape'. Also, the code strikes me as verbose (duplicity between model and guide) and since I imagine BNNs to be a common use case for pyro, I was wondering whether there wouldn’t be a shorter way of achieving it. I know that variational inference with independent Gaussian variational distributions over weights/ biases can never produce a multi-modal posterior, thus I am especially interested in Boosting Black Box Variational Inference — Pyro Tutorials 1.7.0 documentation or some form of exact inference using NUTS or some other MCMC sampler.

In the code below DummyData is a torch DataSet that yields a [BATCH_SIZE x 3] tensor of independent variables (shown in bottom plot) and a [BATCH_SIZE x 1] tensor with the dependent variables. As a first test, I want to construct a NN with one hidden Bayesian layer over which I would like to perform variational inference with independent Gaussian variational distributions for weights and biases. The other layers should just be optimized.

This throws the following error:

Why is this? In Bayesian Regression - Introduction (Part 1) — Pyro Tutorials 1.7.0 documentation example passing x_data and y_data (code block 11) works as expected. Also, does svi step do all the computation and clearing of gradients automatically? Also, how would I add dropout to this NN (possibly for [1506.02142] Dropout as a Bayesian Approximation: Representing Model Uncertainty in Deep Learning)?