Hi,
My name is harish and i am currently in @osazuwa class trying to implement Avi Pfeffer’s Bayesian Object Oriented Programming using Pyro instead of Figaro. 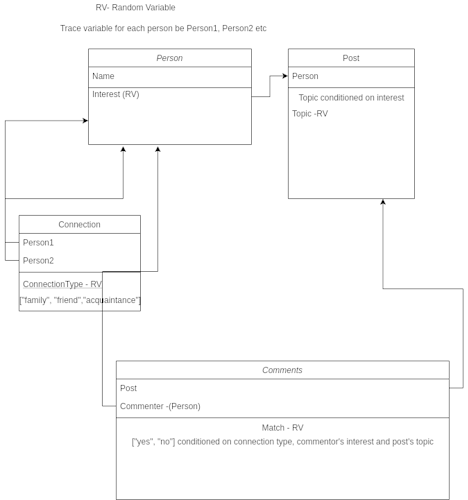 In the above image, we are having trouble with creating trace variables for connection class as the people who have already been connected should be represented only once.

With this set up, we are able to condition using pyro.condition and use an inference algorithm, as to generate a sample, the trace variables are all unique.

How do i tell pyro that its the same thing and you need generate sample only once, which is what i thought would happen if i have the same trace variable.

The code needs a set up to be reproducible (as the data comes in from a RDS). Please let me know if more information is needed or if code could be shared in some way.

Hi @mancunian1792, could you provide some background, and ideally some code for the actual objects? I’m not familiar with Bayesian Object Oriented Programming, so it’s quite not clear to me what you’re trying to do.